Hypothyroidism can often be successfully treated by taking daily hormone tablets to replace the hormones your thyroid is not making.

There’s no way of preventing hypothyroidism. Most cases are caused either by the immune system attacking the thyroid gland and damaging it or by damage to the thyroid that occurs during some treatments for an overactive thyroid or thyroid cancer.

Both men and women can have hypothyroidism, although it’s more common in women. Children can also develop an underactive thyroid and some babies are born with it.

All babies born in the developed countries are screened for congenital hypothyroidism using a blood spot test when the baby is about 5 days old.

About the Thyroid Gland

The thyroid gland is a small butterfly-shaped gland in the neck, just in front of the windpipe (trachea). One of its main functions is to produce hormones that help regulate the body’s metabolism (the process that turns food into energy).

These hormones are called triiodothyronine (T3) and thyroxine (T4). Many of the body’s functions slow down when the thyroid does not produce enough of these hormones.

Many symptoms of hypothyroidism (underactive thyroid) are the same as those of other conditions, so it can easily be confused for something else. Symptoms usually develop slowly and you may not realize you have a medical problem for several years.

Teenagers may start puberty earlier than normal. If you have any of these symptoms, see a GP and ask to be tested for hypothyroidism.

Hypothyroidism (underactive thyroid) is when your thyroid gland does not produce enough of the hormone thyroxine (also called T4).

Most cases of underactive thyroid are caused by the immune system attacking the thyroid gland and damaging it, or by damage that occurs as a result of treatments for thyroid cancer or an overactive thyroid.

Hypothyroidism often occurs when the immune system, which usually fights infection, attacks the thyroid gland. This damages the thyroid, which means it’s not able to make enough of the hormone thyroxine, leading to the symptoms of hypothyroidism.

A condition called Hashimoto’s disease is the most common type of autoimmune reaction that causes an underactive thyroid.

It’s not clear what causes Hashimoto’s disease, but it runs in families. It’s also common in people with other immune system disorders, such as type 1 diabetes and vitiligo.

Hypothyroidism can also occur as a side effect or complication of previous treatment to the thyroid gland, such as surgery or a treatment called radioactive iodine therapy.

These treatments are sometimes used for hyperthyroidism (where the thyroid gland produces too much hormone) or thyroid cancer.

Worldwide, a lack of dietary iodine is a common cause of hypothyroidism (underactive thyroid), because the body needs iodine to make thyroxine.

Babies are sometimes born with hypothyroidism because the thyroid gland does not develop properly in the womb. This is called congenital hypothyroidism and is uncommon. It’s usually picked up during routine screening soon after birth.

An underactive thyroid (hypothyroidism) has also been linked to some viral infections or some medicines used to treat other conditions, such as:

Low levels of thyroid-producing hormones, such as triiodothyronine (T3) and thyroxine (T4), can change the way the body processes fat.

This can cause high cholesterol and atherosclerosis (clogging of the arteries), which can potentially lead to serious heart-related problems, such as angina and a heart attack.

Therefore, you should see a GP and ask for a blood test if you repeatedly have symptoms of hypothyroidism.

1. When to See Your Doctor

Symptoms of hypothyroidism are often similar to those of other conditions, and they usually develop slowly, so you may not notice them for years.

For example, if you are at an age where you may be expecting menopause, you may think you have started menopause rather than having hypothyroidism.

You should see your doctor and ask to be tested for hypothyroidism if you have symptoms including:

The only accurate way of finding out whether you have a thyroid problem is to have a thyroid function test, where a sample of blood is tested to measure your hormone levels.

Your doctor may refer you to an endocrinologist (a specialist in hormone disorders) if you:

A blood test measuring your hormone levels is the only accurate way to find out whether there’s a problem. The test, called a thyroid function test, looks at levels of thyroid-stimulating hormone (TSH) and thyroxine (T4) in the blood.

Doctors may refer to this as “free” T4 (FT4). A high level of TSH and a low level of T4 in the blood could mean you have an underactive thyroid. If your test results show raised TSH but normal T4, you may be at risk of developing hypothyroidism in the future.

Your doctor may recommend that you have a repeat blood test every so often to see whether you eventually develop hypothyroidism.

Blood tests are also sometimes used for other measurements, such as checking the level of a hormone called triiodothyronine (T3). However, this is not routinely offered.

Less commonly, a thyroid antibody test may be recommended after a thyroid function test. This is to help diagnose or rule out autoimmune thyroid conditions, such as Hashimoto’s thyroiditis.

A thyroid antibody test is only likely to be recommended if your doctor suspects you have an autoimmune thyroid condition.

An underactive thyroid (hypothyroidism) is usually treated by taking daily hormone replacement tablets called levothyroxine. Levothyroxine replaces the thyroxine hormone, which your thyroid does not make enough of.

You’ll initially have regular blood tests until the correct dose of levothyroxine is reached. This can take a little while to get right.

You may start on a low dose of levothyroxine, which may be increased gradually, depending on how your body responds. Some people start to feel better soon after beginning treatment, while others do not notice an improvement in their symptoms for several months.

Once you’re taking the correct dose, you’ll usually have a blood test once a year to monitor your hormone levels. If blood tests suggest you may have an underactive thyroid, but you do not have any symptoms or they’re very mild, you may not need any treatment.

In these cases, the GP will usually monitor your hormone levels every few months and prescribe levothyroxine if you develop symptoms.

If you’re prescribed levothyroxine, you should take it at the same time every day. It’s usually recommended that you take your tablet (or tablets) in the morning, although some people prefer to take them at night. 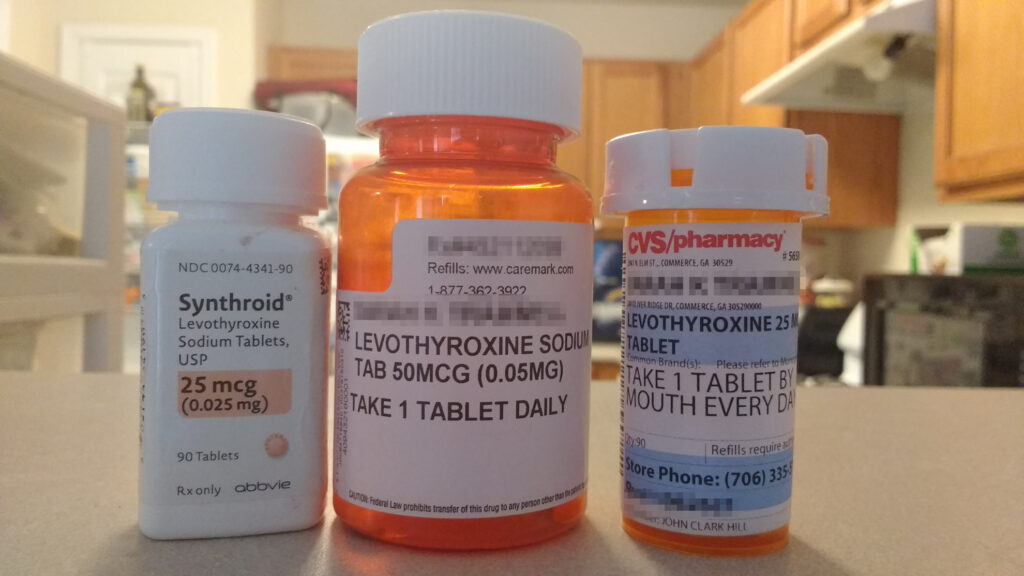 The effectiveness of the tablets can be altered by other medicines, supplements, or foods, so they should be swallowed with water on an empty stomach, and you should avoid eating for 30 minutes afterward.

If you forget to take a dose, take it as soon as you remember if this is within a few hours of your usual time. If you do not remember until later than this, skip the dose and take the next dose at the usual time unless advised otherwise by a doctor.

An underactive thyroid is a lifelong condition, so you’ll usually need to take levothyroxine for the rest of your life.

If you’re prescribed levothyroxine because you have an underactive thyroid, you’re entitled to a medical exemption certificate. This means you do not have to pay for your prescriptions.

In most cases, suppressing thyroid-stimulating hormone (TSH) using high-dose thyroid replacement therapy should be avoided because it carries a risk of causing adverse side effects, such as atrial fibrillation (an irregular and abnormally fast heart rate), strokes, osteoporosis, and fracture.

However, this type of treatment may sometimes be recommended in cases where a person has a history of thyroid cancer and there’s a significant risk of it reoccurring.

Levothyroxine does not usually have any side effects, because the tablets simply replace a missing hormone.

Side effects usually only occur if you’re taking too much levothyroxine. This can cause problems including sweating, chest pain, headaches, diarrhea, and being sick.

Tell the doctor if you develop new symptoms while taking levothyroxine. You should also let them know if your symptoms get worse or do not improve.

It’s important for the health of you and your baby that hypothyroidism is treated properly before you become pregnant.

Tell your doctor if you’re pregnant or trying to become pregnant and you have hypothyroidism. They may refer you to a specialist for treatment and monitoring during your pregnancy.

If Hypothyroidism is not Treated

It’s unlikely that you’d have many of the later symptoms of an underactive thyroid, because the condition is often identified before more serious symptoms appear.

Later symptoms of hypothyroidism include:

Several complications can occur if you have an underactive thyroid (hypothyroidism) that is not treated.

If you have untreated hypothyroidism, your risk of developing cardiovascular disease is increased.

This is because having low levels of the hormone thyroxine can lead to increased levels of cholesterol in your blood. High cholesterol can cause fatty deposits to build up in your arteries, restricting the flow of blood.

Contact your doctor if you’re being treated for hypothyroidism and you develop chest pain, so that any problems can be detected and treated, if necessary.

A goiter is an abnormal swelling of the thyroid gland that causes a lump to form in the throat. Goitres can develop in people with an underactive thyroid when the body tries to stimulate the thyroid to produce more thyroid hormones.

If hypothyroidism is not treated during pregnancy, there’s a risk of problems occurring. These include:

These problems can usually be avoided with treatment under the guidance of a specialist in hormone disorders (an endocrinologist). Therefore, tell your doctor if you have hypothyroidism (underactive thyroid) and you’re pregnant or trying to get pregnant.

In very rare cases, severe hypothyroidism may lead to a life-threatening condition called myxoedema coma. This is where the thyroid hormone levels become very low, causing symptoms such as confusion, hypothermia, and drowsiness.

Myxoedema coma requires emergency treatment in the hospital. It’s usually treated with thyroid hormone replacement medicine given directly into a vein. In some cases, other treatments such as breathing support, antibiotics and steroid medicine (corticosteroids) are also required.